Mercy and truth have met together, righteousness and peace have kissed each other. Psalm 85:10

Why would mercy not be with truth? Why don’t they just hang out?

Why would it be notable that righteousness and peace kiss? Shouldn’t they just be a thing?

Perhaps mercy and truth don’t always need to be around each other. 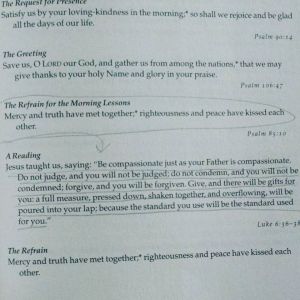 I’m thinking about my years in ministry. When first started teaching, the 6th grade teacher made a big deal about sitting down with me to explain the roster. He pointed out all the problems I’d be having with this student and how that student would be great. He
went on for some time. Then my classes started. As I quickly learned, the truth changed. The students who struggled with him blossomed under me and some that resonated with him struggled with me.

I’m thinking about my years in the prison. A chaplain who preceded me made a big deal of reading and storing all the files on each inmate. He remembered each charge and saw each inmate through the lens of their crimes. I had a hard time doing that. I stopped paying attention. I learned that all of us are capable of horrendous things and wondrous things. Good and bad are in each of us. I found that if I saw the inmate through their crimes, I was less able to extend grace to them. It was not my job to be judge and jury, that work was done. It was my role to be merciful and full of grace.

Perhaps this is a mark of sin. It’s so very hard to live in the tension of mercy and truth. I want to be merciful to someone who is destitute but I also see their choices, decisions, and behaviors that precipitate their demise. I want to be compassionate towards the struggling couple but it’s difficult to see past their infantile behavior towards each other. For me, mercy and truth really fight against each other.

I want to bring righteous justice to the world but sometimes it seems like it’s not possible without the force of arms. Which, of course, means death. I want ISIL to be purged from the earth, to be punished for the evil they do, but that means war. And war means death. And death means suffering for so many.

Perhaps, when the world is redeemed, when we are all at our best, living out the best of the Way, this verse will be true. And so we keep on keeping on…

Mercy and truth have met together, righteousness and peace have kissed each other. Psalm 85:10