I am, by training and vocation, a systems thinker. When I hear a problem, I first seek to understand the issue as best I can and then pose this question: What system might have caused or contributed to this issue and how can we utilize that same system to bring about movement towards a workable solution?

In the past few days, I have read about and heard a great deal of anger, confusion, frustration, angst, and, above all, grief in relationship to the Charlestown shooting. This morning, I listened to an NPR call in program where highly educated professors and journalists talked about the issue and what I came away with was this: there is a problem with racism in this country. Full stop.

I mean, really – what can actually be DONE about this problem?

I humbly offer this as movement towards a workable solution:

Why couldn’t this happen in schools?

Why not have chaplains in schools?

In this country, we have an embedded system of thought which says that we just should not talk about “religion and politics.” The problem with that is, because we are not taught how to have respectful discourse, we only talk about those things in the worst way possible. I offer the anger, hate, and vitriol spewed on social media as evidence.

What if, as I did in my 7 Habits program, we taught religion in schools in a way that promoted healthy and respectful discourse based on seeking understanding? What if every school had a chaplain whose job it was to promote the free exercise of religion by educating (NOT proselytizing) all the students in all the systems of thought that make up our great nation? What if students took field trips to all the places of worship in their cities? What if religion included atheism and “free thought?” What if students learned to see other systems of thought as interesting and not as something to be afraid of and fight against?

There was this moment in teaching the 7 Habits that I came to really see how powerful this could be. The students were engaged in an exercise that had been written by myself, CH Jones, and other inmates. The exercise was to take an intentionally controversial question and discuss it. However, in discussing it, the students had to hear everyone’s past relationship to the problem. They had to make a real and concerted effort to understand the perspectives of everyone at the table (each person would have to agree they had been heard and understood) before they even began to work towards a solution.

Over and over again, in class after class, students would break down decades old barriers simply by seeking to understand in a systematic way. It was there that I learned that we’re just not taught as Americans to hear and listen with understanding. It’s a skill that needs to be developed, honed, and constantly practiced.

What if that was a goal in education?

What if this troubled young man had to go through a class like this? Would it check the hate he was learning? Perhaps and perhaps not but I daresay it might have been enough of a check to hold back violence.

I’m a believer that if we taught our children how to listen with understanding, taught them that other races, cultures, belief systems were what make us great, exposed them to all those cultures in a systematic way then we would go a long way toward making better Americans.

I, for one, humbly advocate for chaplains in our school systems to do work like this. 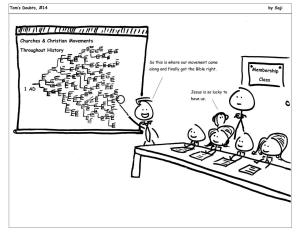 It’s me.
I know it.
I’m aware of it.
This is emphatically my opinion and I speak only for myself.
It’s because I am married to a commissioned minister, a serving pastor. And hey, I’ve become sensitive to it. Recently, at morning chapel for chaplains, a male chaplain preached to “men of God” and completely ignored the presence of the only female chaplain in the room. Of course, this seems to be standard fare. I regularly experience chaplains (and I’ve been guilty of it myself) not even making an atempt at gender inclusive language.

We have a recruiting problem. We need more female chaplains in the US Army.

Yesterday, the US Navy appointed the first female Chief of Chaplains of the Navy. She had been the Chaplain of the Marine Corps (the Navy Deputy Chief of Chaplains) just prior. I applaud it. I am excited and proud of the Navy that they, finally, in 2014, had the courage to appoint a woman pastor to a position of power.

And my service? My beloved Army? From this Captain’s foxhole, our halls of leadership look awfully white and male.

I’ve heard the reasons, and they all sound the same – “the path to leadership needs to go through certain gates and those gates are closed to women. We choose the best candidate, and we’ve just not had a woman pass through the right gates – they are just not competitive for the job.”

It’s 2014 and THAT is still a reason. If gates are a problem, either change the gates or start sending the women through them in order to get them ready to lead the Corps. It’s our Corps and we decide the path to power.

Here’s the thing, my Corps loves to post the story about the first woman commissioned as a chaplain. It was 1974 and Rev. Alice Henderson, a pastor with the African Methodist Episcopal Church, was sworn in at Ft. McPherson, GA and served for 13 years. Since then, dozens of women have served and even gained the rank of COL. But not chief. Not even deputy chief.

And the notion that they “just have not had the right assignments” is not good enough. I have heard for my entire career that the Corps sees you at some point and starts grooming you for leadership opportunities – up to and including the role of chief. So, what I’m seeing, is that for 40 years of women serving in the US Army Chaplain Corps, there hasn’t been one person, one woman, who could be groomed to be the Chief. Not one.

We are not the Infantry Branch, Armor, Intelligence, or Artillery. We are the Chaplain Corps, and we are woefully inadequate in the area of diversity. I can only hope that as I write this, there are great women serving in positions of power who are being groomed for the role as Chief. I hope to serve one in my career.